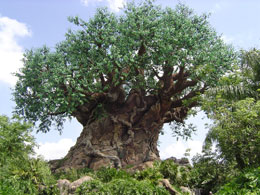 Enter the exotic Oasis through the park gates to one of the largest Disney theme parks in the world, sprawling over 500 acres. In comparison, the park is five times bigger than Magic Kingdom and twice the size of Epcot.

This park is home to over 1700 animals representing 250 species.Over 4 million plants, trees, grasses and shrubs were planted to produce this jungle in midst of the Disney World. It is the newest theme park to join Disney World. The park opened to the public on Earth Day, April 22, 1998. Animal Kingdom is the first Disney theme park to be themed entirely around animal conservation. Here you will enjoy the sites and sounds of nature, educate yourself about the exotic animals, and have a fun-filled Disney day while you are there.

Follow the path through Discovery Island where you will get the first glimpse of the Tree of Life. The Tree of Life is the central point in this theme park. It has been carved out of wood showing animals of the world. Go underneath the Tree of Life and enjoy the 3D show, It’s Tough to be a Bug. Take a safari and see amazing animals out in the wild in their natural habitats. Enjoy white water rafting on the Kali River Rapids, watch the live shows that take place daily, or journey through the Himalayas on Expedition Everest.

Touring the Animal Kingdom takes less than a day with crowds being their heaviest between opening and mid afternoon. Eating a good breakfast and then taking a late lunch is recommended so you can still enjoy the dining at the park which is a cut above the average Disney counter-service food. For some quiet time away from the crowds, stop by the Flame Tree Barbecue’s waterfront dining pavilions.

The Oasis Exhibits
Take a minute to transition from the real world to the Animal Kingdom.  Walk along several different trails to choose from and view the cooling waterfalls, lush tropical plants, trees and flowers that prepare you for what is ahead inside the park.  Stop at the viewing areas and give the birds and animals a chance to appear.  At the end of the pathways emerge into a clearing where the first glimpse of the Tree of Life can be found.

Kids Discovery Clubs
Children will be able to use their imaginations while exploring the six interactive learning stations located throughout the Park.  They will have the opportunity to construct a dinosaur from a pile of bones, go on a scavenger hunt, become a wildlife detective, and see from a bug’s point of view and more.

The Tree of Life
Walk through the heavy foliage of the Oasis and before you stands the 145 foot tall Tree of Life. The branches span 165 feet across. There are over 100,000 leaves on the tree and the trunk is 50 feet wide. There were 20 artists that carved into the truck, branches and roots of 325 animals. Thousands worked on the construction which took 18 months to build.

It’s Tough to be a Bug
See the world through a bug’s eyes.  Located in the trunk of the Tree of Life this 3D one-of-a-kind movie adventure will bring you face to face with smells, buzzing, chirping and stinging throughout the presentation.

Discovery Island Trails
Walk through the vegetated pathways around the base of the Tree of Life that contain small animal viewing areas for encounters with lemurs, kangaroos, Galapagos tortoises and other wildlife.

Festival of the Lion King
This is a production not to be missed. This is an unforgettable performance with amazing costumes and high energy from the performers. See a cast of familiar faces includeing Simba, Timon and Pumbaa.  Through song, dance and specialty performances, this 28 minute long show has one great number after the next.

Pocahontas and Her Forest Friends
This is the story of Pocahontas and her quest to save the threatened forest.  Live forest animals take the stage to demonstrate how they can help the environment. The stage show makes use of music from the film as the background for the intimate show.

Camp Minnie-Mickey Greeting Trails
In the Northeastern forest of cedar and birch trees you will find Mickey, Minnie, Pluto, Goofy, Tigger and Pooh to greet you, sign autographs, and pose for pictures.

Kilimanjaro Safaris
Climb aboard an open-sided safari vehicle that will drive you half way around the world to a 100 acre African savannah. Watch animals from Africa roam freely.  Radio contact with a pilot in the sky will take on a bumpy adventure to find the elephants before poachers can catch them.

Pangani Forest Exploration Trail
The trail takes you into a lush, tropical forest found in the heart of Africa where you can explore a variety of old and new animal friends such as gorillas, hippos, birds and fish.

Expedition EVEREST
After boarding the train, take on the treacherous terrain of the towering Forbidden Mountain.  This ride will take you through hairpin turns and down icy slopes as you try to escape the Yeti. You will find yourself at a dead end as the train slowly moves towards the edge, and then backwards through the mountain for more fun filled twists and turns. Careful, don’t let the Yeti catch you.

Flights of Wonder
This is a light, whimsical show starring birds, but it has at its core, deeper more serious conservation themes. Birds of the world such as vultures, hawks, and the American Bald Eagle will appear and perform to put on a great show.

Kali River Rapids
Hop aboard the 12 passenger raft and be launched into the turbulent Chakranadi River for a wild, wet ride through a jungle jeopardized by illegal logging. Raft through the blazing inferno and down a rushing waterfall.  There is storage space in the middle of the raft so you personal belongings don’t get wet while you will.

Maharajah Jungle Trek
Wander through the mystical Anadapur Royal Forest of Southeast Asia.  On this self-guided walking tour get a chance to see tigers, Komodo Dragons, bats, birds and more.

Dinosaur
Travel back 65 million years to the Cretaceous period in search of an Iguanodon dinosaur.  Your time traveler will race through a meteor shower and come face to face with a large meat-eating predator. The clock is ticking on your Time Rover and you have minutes to rescue a stray dinosaur.

Dino Sue
At 67 million years old, visit this exact replica of the largest, most complete Tyrannosaurus Rex ever found. More than 90 percent of her bones have been accounted for. The replica, like the original, is 40 feet long (the length of a four-storey building) and 13 feet tall.

Fossil Fun Games
Step right up and play the dinosaur-themed games that offer a good time for everyone. Enjoy the carnival games with a distant prehistoric past.

Cretaceous Trail
Enjoy the shady, relaxing, lush and surprising walking tour through plant and animal survivors that have outlived the dinosaurs.  Watch the living animal species that have survived since prehistoric times.

The Boneyard
The Boneyard is an interactive playground for children. Slip and slide through a play maze filled with fun fossils.  Located under the 50-foot-tall brontosaurus as you enter Dinoland USA, paleontologists your and old can play among the world of dinosaur discoveries.

Triceratop Spin
It is a hub-and-spoke style attraction. Guests in 4-person vehicles move up, down and around in a ride that becomes a giant spinning toy top. The top rises to reveal a dinosaur at the hub of it all.

The Primeval Whirl
This ride features colorful cars that whirl past flying asteroids and corny depictions of dinosaur cut-outs that spin and pop up along the track. The spinning coaster takes guests on a wacky time warp back to the prehistoric era on a twisting track of tight loops and short drops with a final descent into the jaws of a giant dino fossil.

This region of the park is made up of several different areas that focus on the environment, conservation and animal life.  Step back behind the scenes to see how the park’s animals are kept healthy and happy.  Watch the Animal Cam to see the animal care areas, and enjoy the hands on experience that allows you to participate in conservation and species survival efforts.  To get to Rafiki’s Planet Watch take the Wildlife Express Train.  After walking for a quick 5 to 7 minutes arrive at a building with an animal collage on the top.

Affection Section
Little ones will love being able to interact with the animals which include goats, sheep, pigs, chicken, llamas and more.  Some of the park’s friendlier animals will stop by and make special guest appearances.

Conservation Station
See Disney’s effort to promote wildlife conservation awareness. This trail will guide you on a discovery where wild animals can be viewed, play interactive games and watch fun-filled shows.

Habitat Habit
Walk through this adventure trail and discover how you can help the animals in ways you never though possible.  Watch the endangered cotton-top tamarin primates up close.

Wildlife Express Train
Ride the rails of a rustic African train that travels through the savannah for a behind the scenes journey.  In just over five minutes, your guided train ride transports you to the core of the park’s conservation centre and through several animal housing and care areas.

DeVine
Devine is a very unique walk-around character at Disney's Animal Kingdom. In fact, she is SO good, you might find yourself walking right past her.

Finding Nemo – The Musical
The show is a 30 minute performance inspired by Finding Nemo.  Disney’s newly enclosed Theatre in the Wild has been transformed into an enchanted undersea world.  Be part of the amazing on stage experience.  Enjoy the singing and dancing with the live actors and larger-than-life puppets.

Live Entertainers
Animal Kingdom has added a wide variety of live performers who entertain periodically throughout the day at various locations.

Artimal Encounters
Characters dressed up in beautiful and bright colored costumes will roam about and greet you.

Backstage Safari Tour
Find out what happens behind-the-scenes at Animal Kingdom. You'll get a look at the innovative ways that they are meeting challenges in areas such as conservation, animal nutrition and medicine, animal care and behavioral studies. There will be visits to backstage animal housing areas to meet some of the keepers and learn how they care for the animals on a daily basis; the Animal Nutrition Center, where all of the animal's diets are prepared; the state-of-the-art Veterinary Hospital and Animal Programs Administration to learn how they are constantly seeking new ways to ensure our animal's health and well being. This tour is approximately 3 hours.

Wild by Design
Learn how art, architecture, historical artifacts and storytelling are combined to transport you to exotic lands filled with wild animals. This 3 hour on-stage, walking tour will provide insights into the design and building of this new species of theme park as well as a glimpse into the challenges of caring for animals and their habitats.

VIP Tour Services
The VIP Tour Services team will customize your vacation so you can spend time playing instead of planning. Upon arrival your guide is there to take care of everything, from your itinerary to getting you the best seats in the house for live shows